What Does Ductility Mean? 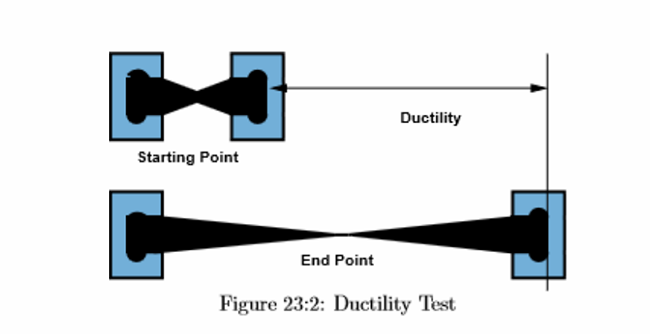 The ductility of a material is its ability to permanently deform in response to stress (e.g., stretch, bend, or spread). For example, the majority of common steels are highly ductile and resistant to localized stress concentrations.

Due to their lack of ductility, brittle materials such as glass cannot withstand stress concentrations and break easily. Under pressure, a material specimen initially deforms elastically, but once it reaches a certain deformation (known as the elastic limit), the deformation becomes permanent.

In materials research, ductility is the degree to which a material can withstand plastic deformation under tensile stress before failing.

In engineering and manufacturing, ductility is essential for determining a material’s suitability for particular manufacturing processes (such as cold working) and its resistance to mechanical stress. Gold and copper are typical examples of ductile substances.

The malleability of a material, a related mechanical property, is determined by its ability to deform plastically without breaking under compressive force. In the past, materials were considered malleable if they could be hammered or rolled into desired shapes. Lead is a material that is somewhat malleable but not ductile.

How to Measure Ductility

Formability is substantially affected by ductility. Extremely brittle metals may not be able to be manufactured satisfactorily. For instance, a metal must possess a certain degree of ductility in order to be stretched into a thin wire.

If the metal is too brittle, it will shatter as soon as it begins to expand. Ductility is another essential safety factor for structural formations. When structures are subjected to heavy stresses, ductility allows them to bend and deform without breaking.

There are two ways to evaluate ductility: percentage elongation and percentage reduction.

During a tensile test, when a metal is dragged until it breaks, its length deforms as a percentage of its original length and is measured as percentage elongation.

The percentage decrease of a specimen’s narrowest cross-section after a tensile test-induced rupture.

The temperature has an effect on plasticity. Consequently, it is crucial to consider the temperatures the metal will encounter in a given application. A chart depicting the transition temperature between ductile and brittle for the majority of metals is available and valuable.

Which Metals Are Ductile?

Gold is exceptionally malleable. It can be stretched until it breaks and transforms into a single-strand wire.

Metallic bonds, which are predominant in metals and confer high degrees of ductility, lend metals their reputation for being generally ductile. In metallic bonds, valence shell electrons are delocalized and shared by multiple atoms.

Delocalized electrons allow metal atoms to slide past one another, preventing other materials from shattering due to strong repulsive interactions.

The ductility of steel varies depending on the alloying elements. As carbon content increases, ductility decreases. Many amorphous solids and polymers, such as Play-Doh, can be deformed. Gold is the most ductile metal, while platinum is the most malleable.

Through the formation, reorientation, and migration of dislocations and crystal twins, such metals deform under intense stretching without appreciable hardening.

Factors That Affect the Ductility of Metals:

Below are a few crucial points regarding ductility:

The grain size has a significant effect on ductility. On a scale of a few microns, many alloys exhibit superplastic behavior when the grain size is excellent.

The temperature has a substantial effect on ductility and, by extension, formability. It promotes ductility in general, but at certain temperatures, it may decrease due to phase transition and microstructural changes induced by temperature rise. Temperature influences the ductility of stainless steel.

At 1050 °C, it is least ductile, and at 1350 °C, it is most ductile. Consequently, its hot operating range is quite constrained.

Learn About The Applications Of Alloy 20 Pipes: Alloy 20 is one of the “Super” stainless steels with the highest acid attack resistance. The presence of nickel, chromium, molybdenum, and copper increases the material’s resistance to chloride stress corrosion, which can lead to cracking and general pitting. Columbium is added to the alloy to prevent carbide precipitation during welding.

Selecting Metals and Alloys for Medical Device Manufacturing: The work quality of metal component manufacturers who supply the medical device industry has recently improved significantly. The product quality of these alloys has never been better since the implementation of statistical process control, ISO 9000 certifications, and other initiatives.